website is open -
uk tour dates announced
feels like summer and 2 other songs and some arts, FREE DOWNLOADY!
im going to tesco 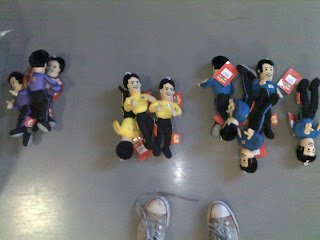 yes our lovely next album is called grace and the bigger picture. it has an alternate title too but we'll leave that for a bit.
the cay session is a peel session from dec 2000. these 4 songs, they're just ridiculously good. bug me to mail you them
yes £100 is fine. would you like a sneak preview? i think this link lasts for 24 hours, so be quick.
(note to record label: not real leak)
it was a tempting offer but £100 between 3 people doesnt write off that much guilt.


this is by our friend eds. THE ROBOT FELL IN LOVE!! we burbled something about a toy robot and he came to see us in laaaaahden and then went and done this. howgoodisthattttttttt? eds also makes zombie films that feature people we know looking undead. they're great, but not so heavy with the robot love scenes. you should go here to see more. i cant wait till we get to do some dvd collection thing. i think we'll be on a par with the weezer one, but lose out to viewphoria. and viewphoria only lasts 2 albums, so we'd better get busy with the puppet scenes.
THANKS EDSSSSSSSSSSSSSSSS!! THEDSSSSSSSS. XXXXX

we have booked (had booked for us in a complicated process we still dont understand) a new UK tour for october. im sure it'll upset most people cos they dont live in one of the 11 cities were going to. but its not places we went to last time. apart from the 3 gravity well cities of birmingham, london and manchester. we'll tell you about it next week, i imagine

my periodical smashing pumpkins obsession has now extended to shouting at darcy when watching documentaries on youtube. on my phone. at work. i love them so much i cant even rank their albums.
kbyexlex
Posted by johnny foreigner at 12:56 AM 6 comments:

sorry we havnt been very internet-prolific lately. heres a load of words to make up for it.

this has what has been happened to us :
kelly has a job in coventry with a really impressive title. she doesnt think its worth the hour and a half commute twice a day. juns been working every waking hour in a bar by the canals. the better the weather = the more customers = the more he has to work. harsh.
i've been working for take that and selling various heirlooms on teh interents.

junior's computer had a heart attack and the hard drive with all our artwork and songs and other historic files momentarily died but its all ok now probably, ta.

crappy band laptop that ive adopted and abused is now the longest surviving computer in our short history. yay! whats a firewalls?

we played in cambridge last night. we love cambridge, it so beats oxford in th indierock stakes. we played some graduation ball. they had a noise limit of 85dbs. and since talking is 80dbs and our band is louder than talking, we thought it'd be a pretty lame night. luckily we got away with the dizzing excess of 110dbs. tho the people clapping and cheering us were in clear breach of pre-organised arrangements and should be prosecuted accordingly. uni gigs are a weird taboo for bands at our level. basically, you get payed a ton of money and get treated like performing monkeys for the evening. read powder by kevin sampson. anyways, in that we owe other peoples approx 10 tonnes of money and quite enjoy certain perfoming monkey aspects, its a bargain we're pretty willing to endure. especially when we walk out the marquee after playing into fucking narnia. well, not narnia exactly, but, a giant garden lit up with fairy lights and free bars and foodstalls and fairground stuff set up around every tree. so, an adult enid blyton narnia. its kinda spoilt when a security guard tells us he's dead sorry but he's been told to quietly eject all the performing monkeys. so we dont get to see the mad orgy finale but do help ourselves to our combined body weight in burgers and currys. and chain drink raspberry moh-he-toes, whoever he is..

also, i made a mixcd of the best songs ever made for sweeping the nations covermount feature. it was fun. if the result of this band is one other person simultaneously being in love with sleeper and rapider than horsepower, ive truely done good on this earth.

the interview process is starting up again and i think, "whats the new album about" is going to replace "how did you form" as most oft-repeated question. and its kinda annoying cos we have no soundbitey cool answer yet. a year ago we were kinda smartarsed and told everyone it'd be a concept album about a band, yeh, who go on tour a lot and go round the world and then go and make their second album. and thats pretty much what we've gone and made. i can pretty much place each song in a different city, which is going to wreck our googlemaps song thing when i get round to updating it, but will make us look dead international and cool. actually, since some of the songs are about people i still speak to/ would like v much to be on speaking terms with i might well bottle it. i imagine being emily kane / jackie big tits / whoever was fun for all of 5 minutes.

anyway, 2008 was like, thee most hectic/extreme/fun year we've ever had and grace and the bigger picture is our attempt to document it.

- junior used meg whites bass drum. it was good.
- i tried one of trent reznors distortion pedals. it made me really angry. there was something evil about it
- kelly borrowed this hand made one off fuzz pedal from alex and fell in love with it. she has some plan to get photos of the circuit boards to try and make another.
- we stayed in williamsburg, which is like shoreditch only with better accents and cheaper pizza.
- one day xtian from meneguar recognised us in the street. XTIAN! FROM MENEGUAR!
- one of the songs features a title mostly designed to make tubelord go "aaaaaaww"
- one of the songs has 3 drums tracks! look paul and john are you jealous?
- we got much better weed deals than when we stay in manhattan.
- tho less party invites
- not that we had the time for any parties. tho we went for breakfast with sky larkin one day, and had a pizza-off with fight like apes.
- alex told us loads of gossip about bands we could never possibly repeat.
- one song features 3 seconds of us pretty much playing a bit of princes and princessess by cay. i robbed 3 notes of a longpigs melody too. and we tried to do a stapleton piano bit. but on the whole, theres way less steals than before. apart from the first song, which is based on Traditional Chord Sequence so its fine.
- one of the songs is the first time ive put a girls name in the lyrics And Kept It. shame she HATES ME..
- alex made us change a chord in this one bit. SELL OUT!
- me and kelly had an intense argument about some minor singing bit that noone else'll ever notice. i think this is tradition now.
- some of the songs are really short. we didnt notice this till we were done, they seem fully formed to us. maybe we have shortened attention spans.
- the last song is called close... which should be pronounced close as in the deus quote at the top of the page, not as in 1234, close the door. *ive totally remembereded writing this that theres an instrumental sleeper bside with the same name. i used to play it in djs sets and try get people to guess who it was cos its basically a velvet underground song played at increasing speeds. anyway SUBCONSCIOUS THEFT IS STILL ART (y)
- one song is called, in every cloakroom ever. there's versions of it all over the internet called weird different things cos the various people we've told the title to didnt understand our accents. and it was called something else anyway.
- there's a lot more song title confusion to come, yay.
- if it leaks then, in financial terms we are fucking doomed.
- we hope you all like it.


we've been skirting round the issue of new songs. my head is full (of them) but it seems a little early, what with having a whole album of unheard songs not even out yet. its pretty fun to think about tho. ive been obsessing over smashing pumpkins, i seem to do this every 12 months. machina ftw. anyway, album no.3 = double cd. yeh.

and, we've been asked to do a song for a guided by voices compilation. which has led kelly to change her find 57 different times and come up with a short list thats reall not that short.

we figure, might as well do two covers if were at it. any suggestions?
george pringle, cay and chow chow are the current leaders in my/our head. i have these cay songs from a peel session that would have been on their second album. they're so so so good.

that was a big rambling spiel about not a lot really wasnt it. i hope you enjoyed it.
xlex

also, look what i found on teh internetzzz this afternoon

i dont know what this is but it's well good.
Posted by johnny foreigner at 6:31 PM 3 comments:

unless we go snow patrol, theres no way we're going to be able to pay our way on mere music alone. so, praise be, we finally have our own worldwide internet online virtual merch store.

actually, gareth did it all and i'm in charge of boasting about it.

LOOK! CLICK ON THAT PAGE BELOW AND BUY OUR NEW T-SHIRT DESIGNS!

we hope you do like them and purchase them. so do all the people we owe money to. ooops! we'd like to institute some kind of extra box where you specified whether we were to spend the money you pay us on household bills, backdated council tax, or a decent curry. but thats just silly.

because we love detail and backstory and that, know this::

we're running this store out of my bedroom. i'm worried i'm going to accidently post one of my shirts instead. plz tell me if i do.


if it says we don't ship to yr country, thats just because we havnt programmed in the postage costs yet. so, either mail us here or johnnyforeigner@hotmail.co.uk and we'll go down the post office and ask the smelly old woman about it.

YOU SHALL ALL WEAR

thx xlex
Posted by johnny foreigner at 12:27 AM No comments: