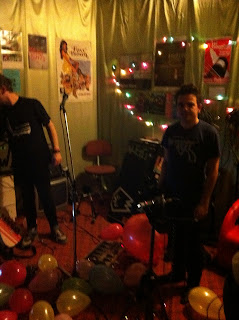 im so tired. ive spent the day on tubes and trains and buses, sittting in the rain outside the wichita offices with shit hair and a deep space 9 tshirt, and we've just finished filming a session for the cool people at moral hangover. by session, i mean, a rehearsal, only with dan dressed up in a skeletor mask throwing giant balloons around and exploding confetti in our faces whilst we played. i think more bands should do this when being filmed. have a dan, i mean. 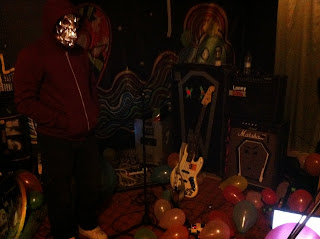 anyway yeh so im too tired for proper grammar and wittisicmsmsms. here are some things you've been waiting for. but first, i have you all seen this stop motion video made by jacob tomlinson for 200x? cos you should. cos he made it for us for free and its The Greatest.
so yayer, here's the sales pitch:
Johnny Foreigner Vs Everything:
our awesome new record. this is it. the cover we leaked was a lie, the record comes in an inked up card case, and will look like this:

here is what i wrote earlier about it, now you can preorder it and hold it in yr hand and cherish it forever. and you should, cos the first run comes with this:
Vs Everything (the transcript):
20 page full colour transcript. comic book sized. i feel obliged to mention that creating this book has literally ruined lewes, i'm sure we'll find funnier jokes after he's had xrays done next week. um, yeh. vs everything. lyrics, the story of the ship explained, and the most gorgeous and lavish and comprehensive artwork project we've ever done. photos from patricia rentschler and jun and you guys. here's some shrunky pages:: 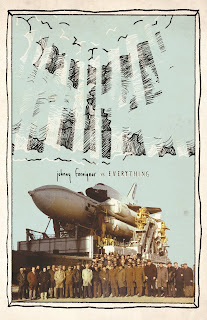 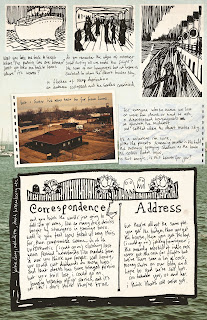 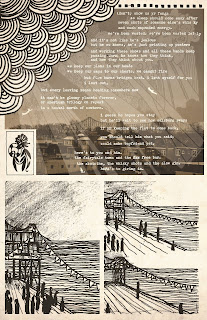 it basically turned from a fancy lyric sheet to another huge time consuming project after we found an awesome comic printing company and noone told us to stop. obvs we can't afford to keep making these with the records, so the CD will come with a 1sheet, and as soon as this run is gone we'll do links to pdfs. Can everyone send good energy vibes to Lewes and his body parts plz.
Vs Everything gloshirt:
. 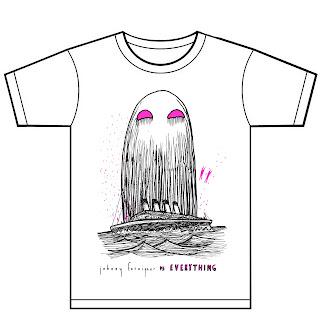 alcopop exclusive tshirt! them bits that are pink right, they're not pink, they're GLOW IN THE DARK. If you don't think that makes this our best shirt yet, you obviously Hate Fun.
Launch Shows!
Johnny Foreigner Vs London
Us, Stagecoach, Screaming Maldini, Echo Lake
upstairs at the garage, Saturday 12th November. 14+.
+ more fun tbc! finding all ages venues in london that aren't tiny or massive is stupidly hard. so we went for tiny. this is going to sell out hella fast, so all you underages should steal yr parents cards and book tickets now. tis being filmed, so overages plz dress sexy.
Johnny Foreigner Vs Birmingham
Us, Stagecoach, Screaming Maldini, Calories, Ace Bushy Striptease, Richard Burke
the flapper, Sunday 13th November. 14+
back home, with the best birmingham bands ever.
there's more stuff we're working on for these shows. including dans dad rigging up a sheet filled with more balloons in the ceiling, some exclusive posters and cake. will write more later in the week, but tickets for both are on sale now. book early to avoid bitching later.
obviously the best place to get All This Swag is Alcopop, go there for bundle discounts cos really, you should buy everything. but if you just want to guarantee tickets before they're gone, hit the links for each night. Antipirates, have yr discount and will mail them off today.
Posted by johnny foreigner at 11:15 AM 2 comments:

packing it, macking, bamboozling and smacking suckers with this track in.

its not everyday i write a blog post purely to reply to a tweet about an old song, but it's not everyday an actual bonafide pop star asks us a question. favouritism sure. but that's cos you didn't write the first song i learnt to play on guitar and this lady did. well, not technically i guess, that was some band called crackhead, (thanks youtube) but anyway
dear spinderella..
i guess it starts with this
being played about 500 times a day when our house first got satellite tv and leading me to confuse everyone who asks what the first song i ever learnt to play on guitar was.
(my 14 year old self is hanging over my shoulder saying, tell her it had nothing to do with the Sexy Foam Shots, we both know he is lying)
the song earned its name thru a string of coincidences. we named it when we wrote it; just as a working reference title, with junior in the middle with his tech stuff and me and kelly stood either side him with microphones, we looked sort of like youse did. ( by sort of, i guess i mean more than normal, most of our songs = loud abrasive guitar pop)
its set inside / outside a late night chipshop (idk what that'd translate to. fast food. greasy post nightclub fried junk) that i realised was called salt and pepper, so the name kinda stuck for a bit longer.
we didn't even think it'd end up being on the record. we wanted to make the end all loud and guitary but we were already in preproduction with an albums worth of stuff, it wasn't priority. then we played it for our producer and he was like, hey, why don't you spend a bit of time making the end all loud and guitary...
it was the last song without an official title. we recorded in new jersey and we got to america a day early, so we were forced to spend the night on couches in the studio. We watched some cable documentary about saltnpepa, and you seemed, idk, a bit underappreciated. (blushes)
so the title stayed as a tribute to you (and because "spinderella" is fun to say) and confused a whole bunch of people. now including yrself, so i guess now the coincidence story has come full circle.
flattered you like it tho! idk when we're back next, our last american tour still exists as a black hole in our bank account. but im sure it'll happen and we'll invite you to a show
xalexei
Posted by johnny foreigner at 6:27 PM 1 comment: