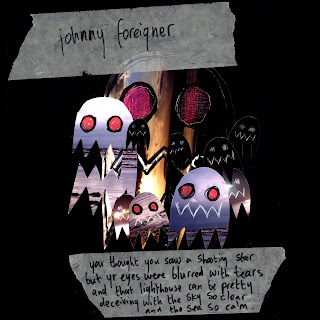 that was a tv comedy reference, you're not really idiots. We're like 2 hours away from leaving for toronto and im totally hyper and not ready.
massive thankyous to everyone who brought stuff from our goodwill sale, and even massiver thankyous to the few of you who found the gift cash button on paypal, we're totally humbled. We're going to work out something very special for you folks in the neat future, you will be remembered.
The end result of cash-drive is enought monies to hire out a winnebago. well, we can only afford the first couple of weeks so far but it's an awesome start and means we can nix hotel costs and make dan cook us breakfast. so yeh. it totally wouldn't be possible if it weren't for you guys. karma says you all get swimming pools.
We're still totally on the scav for places to stay (winnebago sleeps 4 + 2 children and there's 7 of us..) and shower, so if anyone can accomodate us, plz hit us up here:
johnnyforeigner@hotmail.co.uk.
we'll totally guestlist you and tell your friends how rad you are.
if youve bought the digital film package and havnt had a link yet, curse dropbox and email us and we'll send you it.
Play Patterns was awesome fun. leeds = best city. sincere apologies to everyone who that had to leave cos things over-ran. we feel totally shitty about it but it was completely out of our control. if its any consolation, they only paid us half of what we were contracted for because they wanted to try and cut their losses a bit. THANKS FOR THAT GUYS, WE'RE REALLY RICH ATM SO JUST FORGET ABOUT IT K?
So we're another £350 behind what pathetic budget we had, but there's too much good stuff happening to start throwing knives, and Leeds is totally winning the most-extreme-audience-dancing league that we've just imagined.
SO QUICKLY BEFORE WE LEAVE YOU GUYS, here are the dates for our awesome UK tour to celebrate our EP release on alcopop. Support on all dates comes from Stagecoach, who you should be hella excited for.

There's still a couple of shows tbc, but if yr a promotor and see a geographically suitable gap then hit us up. Notice Scotland: We found another city thats not glasgow or edinburgh or the other one. Is it any good? Plz no OMG YOUR NOT PLAYING MY TOWN letters, we've tried to spread ourselves around as much as we can, its ALL your fault for living somewhere with no suitable available promoter. In keeping with US sensibilities, we'll offer guestlist to people if yr coming a stupid distance. So so psyched for this, there's some awesome places we havnt been to for ages and stagecoach are probably my favourite band to watch in the world right now.
So yeh. E.P. time. All the tracks have been approved for mastering tomorrow. So when we finally fall out of aeroplanes we'll have something to listen to.
GUESS WHAT THO! SOMETHING WENT WRONG AND WE NEED YOUR HELP! Here is the Official Page for the release, details (and more lush pictures) are there. don't look at us like that, for once this isn't a money thing, its another stupidly impractical art idea that YOU can be part of.
i'd love to talk shit more but i have to go pack. OMGAMERICAAAAAAAAAAAAAAAAAAAAAAAAAAAAAAAAAAAAAAAAAAAAAAAAAAAAAAAAXXXXXXXXXXXXXXXXXXXXXxxxxxxxxxxxxxxxxxxxxxxxxxxxxxxxxxxxxxxxxxxxxxxxx
Posted by johnny foreigner at 7:54 PM 13 comments: