i don't know whats worse, my enunciation or my handwriting, but anyway, words for the two new songs on the every cloakroom ever e.p. click on them and they grow bigger, like rubbish tamagotchis. 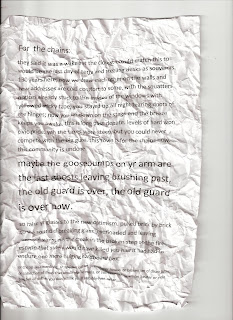 things i would have swapped for heart shaped sunglasses, 2001 - 06: 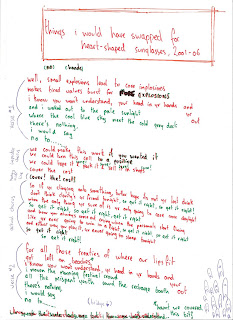 feel free to sing along at home to yrself or make weird acoustic versions to put on the internet for our amusement.
also, i still actually would actually like some heart shaped sunglasses, actually.
kthxby!
Posted by johnny foreigner at 5:47 PM 3 comments:

no pants and other tales fom south africa 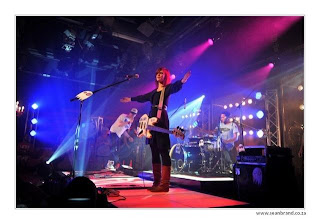 THE GREATEST AIRLINE IN THE WORLD

we didnt mention it at the time, but, when we landed in cape town and all our clothes and instruments didn't, we declared war on KLM, our airline. losing our bags is kinda unfortunate but a risk you generally get used to, being treated so impersonally over an £1800 arrangement isnt. ANYWAY, the morning after our stellenbosch show the 5 of us drove to the airport to fly to joberg, and we had the best flight ever.

kulula are so laid back and friendly, it was the most alien ive felt in a foreign country for ages. our gear was loaded on the plane with no hint of excess charges or damage warnings, the inflight trolley sold real food at normal prices, and the pilot used the intercom to talk to the passengers like he was their dad taking them out for a joyride. i had a row of seats to myself so i was mostly asleep, but i did hear
"if you get bored you could read the safety instructions. thats serious buisness"
"i'm sorry we didnt pack enough meat sandwiches"
and
"now flying over joburg, i'm locking the doors"
amazing. I'm going to ask them for sponsorship.

anyway, we landed and had to wait for ben to fetch the spare keys to his car on accout of having left the actual keys in a cubbyhole as a result of smoking too much because of us smoking so much. It was fine tho, we did what all touring bands do when stuck and watched southpark, stopping only when our laptop and us nearly got run over by some dude stealing a mercedes and driving up the kerb leaving us and a load of police with guns drawn looking angry. 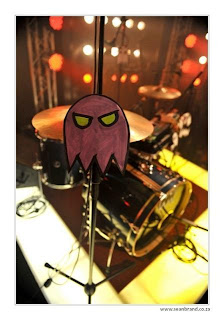 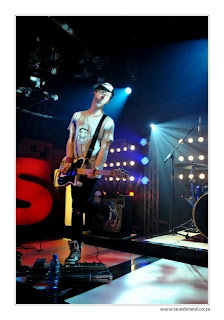 we excused ourselves and took a sleep deprived trip to the glam world of SHOWBIZ TELLY. MK is like MTV for south africa, srs bznz, we rehearsed each song 3 times, did mock interviews and walkons, did makeup, made small talk with underwear-deprived presenter lady, and then went on in a sleep deprived hustle like presidents being taken to the last helicopter out of the blast radius. 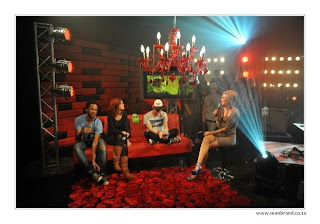 it was kinda awkward, like an instore only with super bright lights. my guitar broke for a bit, to make up for it, i did bunny ears behind the presenter. swings and roundabounts innit.

massive love for teh kidss what came down to watch us, especially him with the carpool plan and her with the awesome quality homemade tshirt


we did another thing called my mk celeb, in which we pick the top ten music videos, like, EVER. we were super excited till we read the list, so we just picked the bands we'd heard of. watch it, if you like hearing us talk about things we know very little..

and then we went back to bens amazing big house and ate nandos and collapsed asleep on sofas. actually i made a painstakingly perfect bed out of a pile of blankets and pillows and it was ace..
Posted by johnny foreigner at 11:18 PM No comments: